198 people enter the Tour de France this year but only 1 can win. Out of the 198 people, there’s really only about 10 people that are likely to win the overall race and of those, there are 2 clear favorites this year. I’ll discuss those favorites in a future post but today, I want to discuss the sprinters.

During most of the multi-day cycling races, there are multiple competitions in addition to the overall winner. One of these competitions is for the sprinter’s jersey. During the Tour de France, there are multiple check points in the middle of most of the stages where racers can earn points by being one of the first racers to cross the check point. These racers can also earn sprinter’s points by crossing the finish line first. This competition was created about 60 years ago because the sprinters struggle when the race reaches the high mountains and therefore cannot win the overall race. It also creates some additional excitement during the race, creating a race within the race.

The traditional way to win a sprint finish is to have a lead out train. This is where 6 or so riders will form a single file line of racers, usually all team mates, and they will slowly accelerate from 30 mph to 40+ mph. The team’s strongest sprinter is in the last position in the line. Each of the racers in the line will take a turn at the front of the lead out train riding at an increased pace. As the speeds go up, the time taken at the front of the train decreases and one by one, the lead out train gets shorter and shorter as they approach the finish line. Ideally, the sprinter takes over during the last 100 meters or so and can reach speeds in excess of 50 mph.

For the past few years, Mark Cavendish has had the perfect lead out train and as a result, has won more of the sprint finishes than any other rider. This year, Cav, or the Manx Missile as he’s often referred to, has changed teams and now rides for Team Sky. Here’s a video where they discuss and demonstrate the lead out train.

It has been said that a team cannot compete for both the sprinter’s jersey and the yellow jersey that the overall winner receives. Attempting to do both would likely result in failure to achieve either goal. Team Sky has one of the favorites to win the overall race this year in Bradley Wiggins and as a result, Cav has stated that he will ride in support of Wiggins. Team Sky has a choice to make this year; support Bradley Wiggins bid to win the Tour de France, support Mark Cavendish to win the sprinter’s jersey, or attempt to do both.

Cav can win stages without the support of his team by muscling his way in on another team’s lead out train, drafting off of them, then pulling out on his own at the last possible second, accelerating and crossing the line first.

We learned the truth today as to what Team Sky and Cav’s plans would be at the finish of Stage 2 when Cav locked onto the wheel of his former team mate, Andre Greipel only to take him at the line and win by about a foot.

I predicted a win by Cavendish in yesterday’s post and today it came true. It wasn’t a bold prediction but the manner in which it happened was different than previous wins as he did not have the proper lead out train he’s had on previous teams. Team Sky is going for the yellow jersey this year. 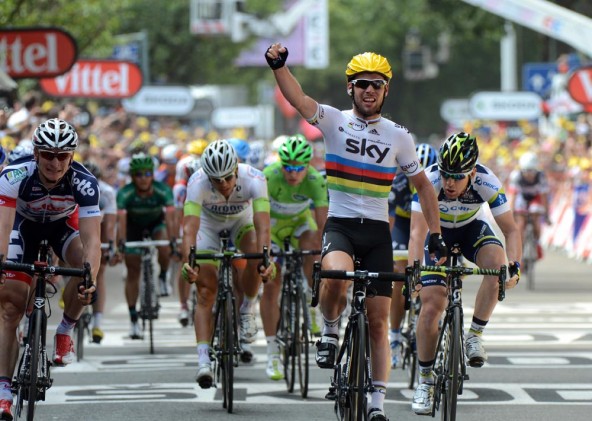 Cavendish crossed the line first in stage 2 of the TdF. 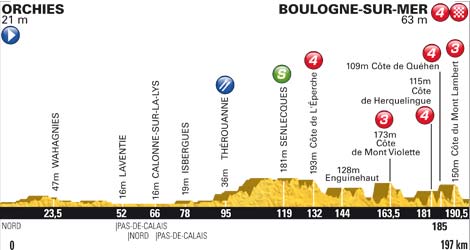 Stage 3 is 122.4 miles and has a stage 3 climb followed by a short uphill finish.

This is one of the more difficult stages to predict but I would expect at least one of the favorites to attempt an attack on the Côte du Mont Lambert and then fly down the hill and sprint their way across the line. This will be a way of sending a message to the other riders that will attempt to win the Tour de France that they are strong and going to make a run at it. I don’t expect that their attack will be serious but if it isn’t countered immediately, it will become serious in a hurry.

I expect that defending champion Cadel Evans, along with Bradley Wiggins to be the most likely to counter the attacks while hopefuls like Samuel Sanchez, Ryder Hesjedal, Robert Gesink could be leading the attack. Opportunists Philippe Gilbert or Peter Sagan could also attack on the final hill if they’re able to hang with the peloton on the climbs before the finish.