Today’s stage profile looked incredibly flat and that’s likely a sign that there won’t be a lot of excitement beyond the final 3 miles of the race. But that doesn’t mean that there isn’t news. It was announced today that former team mates George Hincapie, Levi Leipheimer, Christian Vande Velde and David Zabriskie have allegedly given evidence to the USADA investigation that has charged Lance Armstrong with doping.

In June of this year, the United States Anti-Doping Agency formally charged Lance Armstrong with the claim that they had evidence that Armstrong had used performance enhancing drugs to win each of his 7 Tour de France victories.

My opinion on the usage of PEDs is this — if you pass the tests at the time they were administrated, you’re not guilty. Now that doesn’t mean that he didn’t use something or that I’m condoning the use of something. It means that he passed the tests. Going back in time and re-testing urine or blood samples feels pointless to me. In Armstrong’s case, it feels particularly vindictive and drenched in vengeance because the rumor within the peloton is that Armstrong is rude and not liked.

Lance Armstrong just posted this on his Facebook page.

Incidentally, the report that the riders testifying against Armstrong in exchange for a reduced 6-month ban has been proven to be untrue.

At the start of every stage of the Tour de France, 3-10 or so opportunists will sprint out in front of the peloton in an attempt to survive the day and get a stage win. This almost never works now because all the riders wear race radios and know exactly how far ahead they are and how much distance is left before the finish line. The team’s race directors can do a little math and tell their team exactly how much faster they need to go in order to catch the lead group.

Someone in one of these break away groups does occasionally win but it’s so rare that one would wonder why you’d even bother with such a strategy. You’d think that the best strategy would be to conserve energy by riding with the peloton and then attack at the very end of the stage and hoe for the best.

However, there’s a secondary reason one might want to break away, even if you don’t try to win the stage — publicity. The riders in the front are heavily featured on the televised broadcasts where they often mention a little about each one of them but more importantly, their team names and sponsors are frequently discussed and on display, which the sponsors love. If you make your sponsors happy, you tend to have a job for longer.

Most time advantages that a break away has established vanishes within the final 5 miles, yet 3 miles to the finish today, the break away riders still maintained a 25 second advantage. And with just about 3 miles left to go, there was yet another big crash in the peloton, where Tyler Farrar crashed hard for the 4th time in 6 days, nearly taking out yesterday’s stage winner, Andre Greipel in the process. Both of Greipel’s feet came off the pedals and it was all he could do to keep the bike upright. This was exactly what the break away riders were hoping for.

It really looked like one of the men in the break away would survive today but within the very final moments of the stage, the sprinters caught and passed them. It was all the usual culprits as well — Cavendish, Goss, and Sagan but the shock was when Andre Greipel finished first and got his 2nd stage win in as many days at the 2012 Tour de France. 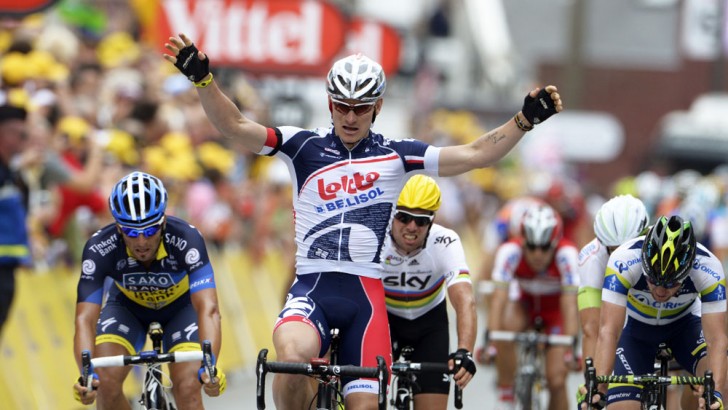 Tyler Farrar was able to finish the day’s stage, some 7 minutes after the peloton crossed the finish line. Blood was seen dripping off of his elbow. At this point, I would consider Tyler Farrar lucky to be able to continue to the race and it would be a miracle if he were able to even contend in tomorrow’s sprint finish stage. 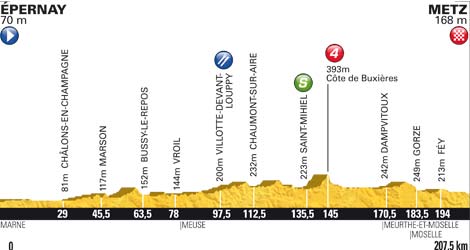 Stage 6 heads to the base of the mountains where we’ll get a preview of the high mountains to come in week 2. It’s a flat stage so expect Cavendish, Greipel, Goss, and Sagan to be in the mix.