I was away from the house yesterday and was unable to do a timely stage review. Here’s the important stuff:

Tyler Farrar was able to start stage 6 and was said to not be participating in today’s sprints. His body was covered in bandages.

Andre Greipel, winner of the last two stages, crashed twice and was seen bleeding from his elbow and knee and there was a report of a hand or finger injury of some sort.

A large crash occurred with about 15 miles left to race that delayed about 50 riders including GC riders Frank Schleck and Ryder Hesjedal who more than likely lost their bids to win the 2012 Tour de France today. Mark Cavendish was also at least delayed by the crash and would finish the stage many minutes behind. Teams BMC and Team Sky were able to keep their leaders safe by avoiding today’s crashes and those that missed being involved in the crash stepped up the pace and reeled in the day’s break away riders which would also create a significant time gap over those involved in the crash.

Team Orica formed a lead out train in the final miles to give their sprinter Matthew Goss the best chances of winning the stage. Amazingly, team Lotto also organized a long lead out train for the injured Andre Greipel and Peter Sagan locked onto his wheel. The last of the breakaway riders of the day were caught in the final mile of the day. Approaching the final stretch, team Lotto were in position to lead out Greipel when Kenny Van Hummel’s chain broke and Peter Sagan accelerated and defeated the injured Greipel who likely had less than 100% to give. Goss finished in third.

Frank Schleck finished just over 2 minutes behind and was shown holding his bars in an odd manner. I don’t see him being able to pull back 2 minutes of time and I think that this turn of events has ended his bid for the yellow jersey. Ryder Hesjedal lost over 13 minutes on the day as well. 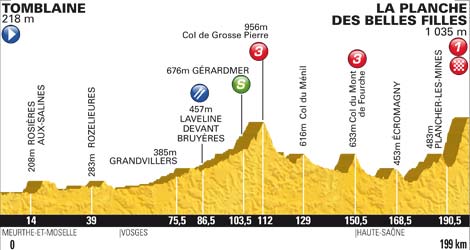 A steep climb at the finish of the stage will likely cause a change in the yellow jersey standing where Bradley Wiggins, who’s just 7 seconds behind Cancellara is expected to take the overall lead of the race.

While this is the first stage of the race that’s likely to shake things up, I don’t expect anything to crazy to happen. Most of the GC guys will finish within seconds of each other, though Frank Schleck is the rider most in need of making up time at this point. He’s the one that needs to win the stage the most.