2011 Tour de France King of the Mountains winner Samuel Sanchez crashed hard around the midpoint of stage 7. Two other riders were also caught up in it and landed on top of him. The way the medical staff was tending to him, it looked like he may have injured his collarbone. He was last shown abandoning the race with his arm being placed in a sling and then placed on a stretcher.

As I mentioned yesterday, predicting a winner of today’s stage was impossible. The stage profile would encourage opportunists to attack early and often in an attempt to win the day’s stage.

With about 60 miles left to go, attacks came in one after the other by riders trying to break away by themselves and other riders would chase them down. It’s a good stage for this tactic but none of the early attacks survived because they didn’t have anyone to support them.

All of the sprint points were taken by opportunists on breakaways so there was not a bunch sprint today and it didn’t change anything in the point standings for the green jersey.

Team Liquigas organized and began pacing Peter Sagan up the hills in an effort to deliver him to the finish line where he could again sprint and get another stage win but that wasn’t in the cards today as the final hill was just too much for them.

For awhile, it looked like Fredrik Kessiakoff would be able to win the stage when he hit the final climb of the day with a one minute lead over 2 chasing riders — Thibaut Pinot and Tony Gallopin but that Category 1 climb was just too difficult and Pinot was able to drop Gallopin and pass Kessiakoff on the hill. At the point of the catch, Pinot had a 2 minute lead over the peloton with 10 miles to go, most of which were downhill. It could prove to be difficult for the peloton to catch him today.

One by one the GC guys would move to the front and the favorites would begin to pull away from the peloton. These men would attempt to chase down Pinot and Kessiakoff but they would only be able to catch one of them as French rider Thibaut Pinot would go on to get the stage win by 26 seconds. In the last mile, Cadel Evans again attacked and the others were forced to answer. The remaining top 5 today were Cadel Evans, Tony Gallopin, Bradley Wiggins, and Vincenzo Nibali. 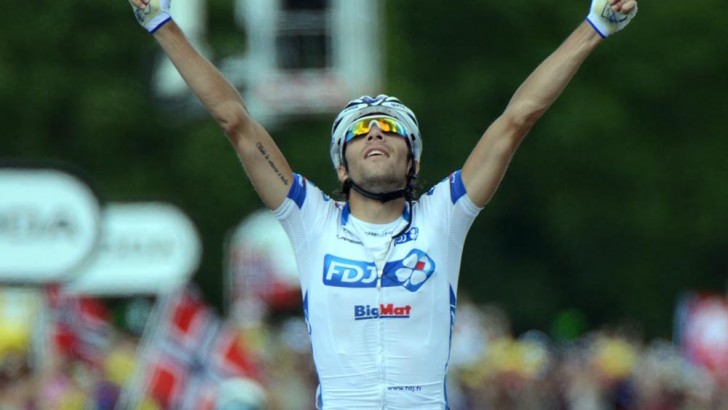 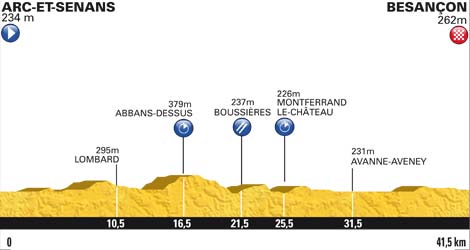 Tomorrow’s individual time trial will shake up the results. Specialists Fabian Cancellara and Tony Martin are the favorites to win the stage but the real competition will be between 1st and 2nd place riders Bradley Wiggins and Cadel Evans. We could have a new man wearing the leader’s jersey after stage 9.