That tiny little Cat-3 blip on the profile known as the Mont Saint-Claire turned out to be very steep and played a much larger part in the stage than I had anticipated. Cadel stayed true to his mission and was quick to attack on the climb. The GC leaders quickly caught up to him and nullified the attack. Cadel’s intention to attack was quickly turned into him pacing the leaders up and over the hill. This did nothing more than drop all of the sprinters out of the peloton. They would have to play catchup now.

Alexandre Vinokourov would attempt an attack immediately after the climb. Vino, as he’s commonly called, was said to be riding in his final TdF last year but a tremendous crash in which he broke his femur ended his race prematurely. Like any competitor would, he decided to give it one more try and he clearly wanted to get one final stage win.

Team Lotto would begin forming a lead out train for Andre Greipel and Peter Sagan would latch right onto his wheel. Boasson Hagen was also in on the train. The leaders would be caught within the final mile and the speed would be so great that the peloton would be decimated. All that was left was the lead out train for the few sprinters that were left.

Louis-Leon Sanchez would be the first to attack but he lead out WAY too soon. Then, in a move that no one could have imagined, Tour de France leader Bradley Wiggins would crank up the speed for his team mate Boasson Hagen leading him out to try and get him the stage victory. In the end, it wouldn’t be enough as Team Lotto’s Andre Greipel would capture his third stage win of the race. Sagan comes in second about a foot behind him. 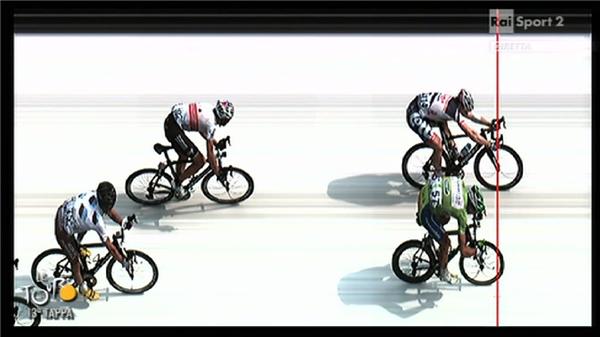 Greipel edges out Sagan in stage 13 of the TdF

Here’s an update on the various standings: 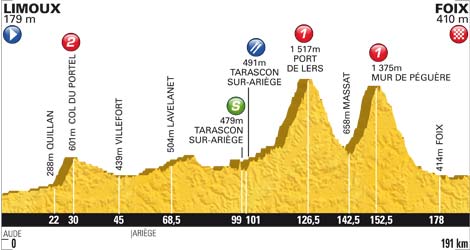 It doesn’t even look possible to walk up those two climbs and some how, these guys are going to ride up and over them.