A break away of 11 riders has a massive lead of nearly 15 minutes on the peloton and I believe that one of these riders will go on to get the stage win today unless Cadel Evans and Vincenzo Nibali attack in tandem, which I do not expect to happen.

Rain began and worsened on the descent of the Port de Lers climb. The wet pavement would prove to make the decent slick and scary. The riders were quick to put on their raincoats before the descent started.

Peter Sagan and Philippe Gilbert are among the riders in the lead group which makes me think that they’re expecting their team mates, who are currently in 3rd and 4th place over all, to attack on the second climb in an attempt to make up time on Wiggins.

Louis Leon Sanchez would do his best to thwart that plan when he attacked on the 2nd climb. It was a good move because he immediately got rid of 5 of the riders in the group and 2 others, including Sagan, would drop off the leaders but do their best to keep them in sight. Sagan would eventually catch up with the group when French cyclist Sandy Casar launched his own attack to reach the top of the mountain first.

When the GC riders got to the second climb, the roads were so narrow that they could only ride at a width of about 3 riders at points. It looks very dangerous, not to mention incredibly hard. Team Sky quickly regained control of the group and that would make it very difficult to for anyone to launch an attack.

At the summit of the climb, Cadel Evans hopped off his bike and waited for his team’s mechanic to replace a flat for him. The good news for Cadel was that his team mate George Hincapie caught up to him and waited for him. Evans would two additional flats on the descent. He lost a lot of time but team Sky slowed down their pace, perhaps in a sign of sportsmanship. Evans was a total of 2 minutes behind them.

It turns out that there were at least half-a-dozen flats here and it was later confirmed that dozens of tacks were discovered on the road. Wiggins was also a victim with under 10 miles to go.

Louis Leon Sanchez attacked on his own with about 6 miles left in the stage and quickly opened up a 15 second lead when no one countered. This is a move that would prove to hold up as the remaining 4 riders chasing Sanchez would not be able to catch him.

The remaining 4 riders would sprint for 2nd place but Sagan easily took the line first. The riders in the GC group slowed their pace to that of us mortals in order to let Cadel Evans catch up to them. It wasn’t Evans’ fault that he had all those flats and they weren’t going to punish him for it. It was a wonderful show of class by Team Sky. 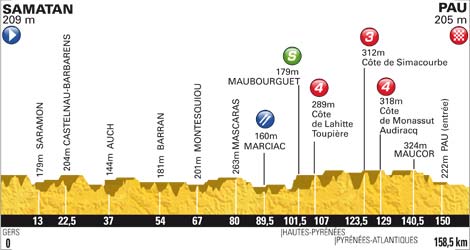 Rolling hills for stage 15 of the TdF

A series of rolling hills will prove difficult for the sprinters but I expect one of them to win the stage and it will likely be Greipel or Cavendish.