Stage 15 was boring until the last few miles. A break away got out, opened up a 10 minute time gap, and survived. French rider Pierrick Fedrigo attacked the break away group in the last few miles. They failed to counter so Garmin rider Christian Vande Velde rode across the gap to prevent him from getting a walk at the line. It was exciting because the American has tried this before and it’s clear that he really wants a stage win today. Unfortunately, Fedrigo did too and he was faster. Fedrigo got the stage win.

The peloton weren’t interested in chasing them down and took it easy on this stage prior to heading back into the high mountains. 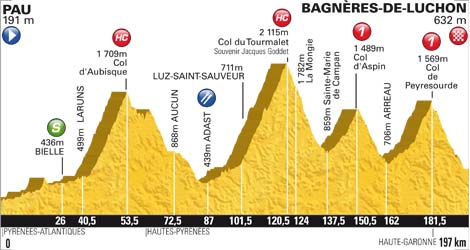 Mountains, lots of them

Tomorrow’s stage will be very telling. A series of HC and Cat-1 climbs followed by a descending finish. There will be attacks by GC contenders and you have to expect that Cadel Evans will do everything he can to win the stage.