The King of the Mountains race was fully underway today as it’s one of the final mountain stages of the 2012 Tour de France. Points are awarded for the first few riders that reach the apex of each designated climb. It’s really a badge of honor and the most coveted jersey available aside from the yellow jersey. It implies that you’re the toughest racer in the tour that year and that you conquered the Alps and/or Pyrenees better than any other racer.

Races like the Tour de France are typically won in the mountains where only a handful of the riders are able to push themselves to the point where they’re able to outperform the bulk of the other riders in the race. The rider that gets the polka dot jersey is typically someone that either has a weak team around them that aren’t good at pacing their climbers up the mountains or are generally poor at the time trial discipline where they lose too much time to overcome.

He made a run during stage 10 for the points but he didn’t make any effort for them in stage 11 so I thought he might not be trying for that jersey after all. Today proved me wrong when he attacked early with two other riders, one of whom was dropped early.

Voeckler would go on to take maximum points at the peak of every mountain today. He attacked the only other rider that was with him on the final climb, opening up a lead of about 1:30 and then went on to win the stage. Voeckler has become the favorite son of France in this race over the last couple of years. Today he’s likely fulfilled a dream of his by taking over the King of the Mountains jersey with only one high mountain stage remaining. There are probably other points available for the competition but they’re unlikely to impact the jersey points race. The jersey will be won for sure at the conclusion of Stage 17.

Cadel Evans again showed weakness when he was dropped on the final climb and his team had to pace him back up to the group with Tour de France leader, Bradley Wiggins. He certainly hasn’t looked like someone that was capable of winning the race this year while Wiggins has looked like a machine, riding his own race while almost never reacting to any of the attacks from the hopefuls, though he and his teammate Chris Froome did respond to the attack of Vincenzo Nibali today on the final climb. They didn’t get out of the saddle and aggressively match the attack set forth by Nibali; they stayed in the saddles and simply kicked up the speed a bit to reel Nibali back in. Wiggins looks unbeatable this year and  will go on to win the race due to his uncanny ability to ride a steady high-pace up the mountains which very few others were able to match. 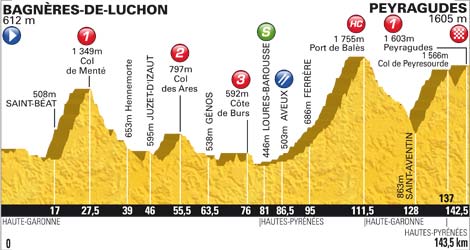